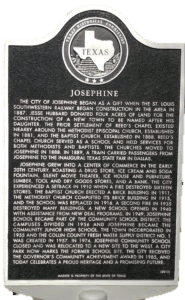 Josephine was established in 1888 when the tracks of the St. Louis, Arkansas and Texas Railway reached the area. It was named in honor of the daughter of J. C. Hubbard, who donated land to the Cotton Belt Railroad Company for the town site.

Another gentleman, Mr. Reed, also donated land for a community known as Reed’s Chapel, which was located two miles southeast of Josephine. It consisted of a Methodist church and school (both in the same building) and a burial place that is now known as the Josephine Cemetery. That same year, a post office was established. Josephine quickly became a retail market center for area farmers.

People followed cattle trails across the prairies on horseback and in covered wagons to bring in supplies from Caddo Mills and Greenville in Hunt County, and from Terrell in Kaufman County. In 1889, the Cotton Belt passenger train ran through Josephine to Dallas. It took settlers to the first Dallas Fair.

The town’s population increased from about 200 in 1900 to well over 500 by the mid-1920s. By 1930, the community had paved roads, electricity, a public school, a bank and 15 businesses. The Great Depression, however, reduced the number of residents to 350 by 1940. Mechanization of farming and job opportunities in the Dallas area combined to decrease the population to just under 300 by 1960, but by 1982 it had increased to 416. In 2000, Josephine’s population was reported as 600 and the town had expanded into Hunt County.

Josephine was incorporated in 1955.

In the years around 1910, the air in Josephine, Texas, smelled of Sulphur as the Cotton Belt Railroad made “Gumbo Gravel.”

Long trenches were dug with steam shovel. A layer of crossties were placed in the trenches.  Then a layer of coal and a layer of dirt were placed on the crossties. The area was watered to keep the coals from burning too fast. This process was used in making the reddish gravel known as “Ballast Gumbo Gravel.”

Mr. and Mrs. Harvey were in charge of burning the coals. Engine Number 4, also known as Dinky, was used in transporting the gravel to the main railroad line.

The Cotton Belt Railroad used the “Gumbo Gravel” in making the railroad track from Fort Worth to Texarkana, Texas. The “Gumbo Gravel” was used to hold the crossties in place and keep them from washing away.

Three pits were created on the Jordan land about two miles north of the Josephine business section. Later, two more pits were dug on the Hubbard land south of the pits. As a result, small lakes were formed.

If you have any additional information or family photographs regarding the history of Josephine, please contact City Hall at (972) 843-8282.